In 2017, Manchester Pride will be celebrating its 27th anniversary of lesbian, gay, bisexual and transgender rights in Manchester. As one of the longest-running celebrations in the country, the festival attracts thousands of people to Manchester's Canal Street. In the coming days as you can see on our countdown, 'The Big weekend' a 72-hour party will be taking place over the August bank holiday weekend.

The History of Pride

Back in 1985 on a bank holiday weekend in August, the Manchester Gay Pub and Club Olympics and Gay Centre Fun Day took place. In 1990, after 4 years there was another pride. This time pride occurred in June and this became the traditional month for pride to take place in. During this time, in 1989 the 'Celebration of Gay and Lesbian Diversity Love Rights' was organised in Manchester. Consisting of a music festival and political march the main focus was on the gay rights movement.

In the years that followed, Pride was used to raise awareness of gay rights and raise money for charities. HIV and AIDS were the main cause to raise money to aid prevention. During this period the festival was named Gayfest and went from a free event to raise over £500,000 in the next 3 years. At the 2003 Gayfest closing ceremony, it was announced that the event would be renamed to 'Manchester Pride'.This has remained the case over the last 14 years as the event has grown and grown to become a world renown event. Now in 2017, the event is celebrating its 27th anniversary. With a whole new theme which you can read about below, the festival is aiming to be bigger than any year before.

In the next few days, the 2017 Big Weekend is being hosted at Canal Street. The 3-day festival has a vast variety of different events and live performances that are bound to entertain. Tickets are currently still available so if you are interested here is more information about what is happening over the 3 days. 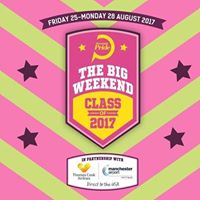 Friday has huge live performances from world renown music artists. With Pixie Lott and Saara Aalto performing before gay icon Melanie C. Performing her latest album on the USA stage her set starts at 21:45, Mel is bringing her new music and old Spice Girls tracks to her adoring fans, so expect dance routines and flashing lights. Friday also sees huge drag star Sal Ford do her thing whilst Drag Roulette is bound to wow and entertain.

Saturday is another huge day for music fans. With DJ's Example and Blonde performing, it is a day for house and dance music lovers. Other music stars like Anne-Marie and Fuzzy Jones are bound to bring fun and energy as they perform chart-topping tunes. On Saturday, new to 2017 there is a Gaydio Dance Arena, bringing the hosts of Manchester number one gay radio station to the stage. With the latest tunes and a dance stage, let your hair down and turn into a dancing queen.

Sunday is the final day of the festival. So let's go out with a BANG! X Factor winner Louise Johnson will be performing with Clean Bandit. Already known for having huge collaborations together, expect to hear the song 'Tears' rock the crowd. If old-school vibes are more your thing then, Katrina & the Waves are also performing. There is also a new event taking place Sunday night. A sing-along cinema experience as you watch Grease live on a big screen.

Even if the events and music are not really your cup of tea then please get down to Canal Street for the parade. Taking place on Saturday, this year's parade is themed on The Class of 2017. Bringing back ties too short and blazers that are too big, you will be seeing stretches far beyond the classroom. Think of glee clubs, sports team and combine them with colour and energy. It's time for your gay graduation ceremony so don't miss out.

LGBT Slang and what it means

Vote For Your Featured Manchester Escort Of 2018

The Best Gay Sauna Manchester has on Hand

11 December 2017
Gay Saunas have become quite a trend of recent in the gay community. Read to discover what all the fuss is all about.